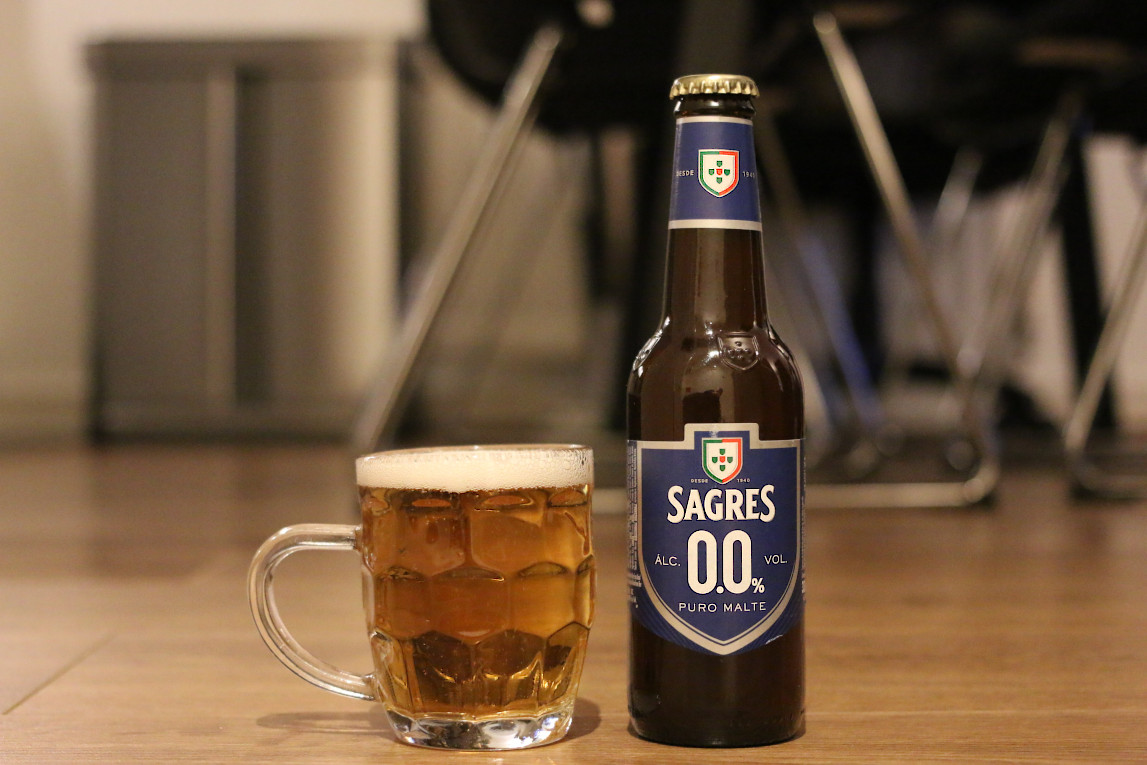 Anyone who has been on holiday to Portugal will probably recognise the Sagres logo. A popular beer amongst the Portuguese, the brand even sponsors the Liga Portuguesa Futebol, cementing the company’s lagers into popular culture like nothing else can. Brewed by the ‘Sociedade Central de Cervejas e Bebidas’ (which translates to the very Orwellian-sounding ‘Central Society of Beers and Beverages’), the Sagres lager has been around since 1940. Despite the brewer being located just north of Lisbon, the beer was named after the port town on the far south-west of the Algarve. One of the sunniest parts of Europe, there are sure to be many of bottles of Sagres actually consumed there, and probably mainly by British tourists.

Sagres 0.0% Puro Malte started it’s life as Sagres Zero, which was launched in 2005, around the same time that a number of other European lager brands brought out their own non-alcoholic versions. Sagres Zero clocked in at 0.3% ABV, and was marketed towards “people with busy lives who cannot go without Sagres’ original flavour”. Onwards to 2012 and SCC managed to squeeze the remaining 0.3% of alcohol from their product, rebranded it as Sagres 0.0% Puro Malte and slapped a new label design on it. With ‘puro malte’ translating to ‘pure malt’, will we be seeing a standard malt-forward lager here, or does Sagres 0.0% have something else up it’s sleeves?

Pouring out from the bottle we get a light golden coloured liquid with good clarity and some visible carbonation. A white frothy head is produced but retention is short. On the nose we get mainly sweet grain malts, but there is also a slight banana aroma hanging around in the background, though it’s heading down into bubblegum territory.

On tasting the beer we get an initial malt sweetness, which is then backed by a slight herbal hop bitterness. Quite standard, inoffensive lager taste here, but then it veers off slightly into wheat beer territory again, with a banana aroma peeking out from behind the hops. The beer stays pretty much on standard pilsner track afterwards though, with a crisp and refreshing taste, and a short bitter finish. The carbonation is good and gives the mouthfeel a good platform.

So, Sagres 0.0% Puro Malte is a pretty average lager, but that’s no bad thing. An easy-to-drink non-alcoholic beer is what a lot of people want, and this has both of those points covered. It also has an additional point of interest with the momentary detour into weissbier country that the taste takes us into. And whilst it’s a short trip, it’s not unwelcome.

I’ve seen Sagres 0.0% Puro Malte occasionally for sale in various supermarkets, but you’re best bet is to get it online from the following drinks retailers:

A good lager doing what a good lager should do, with almost zero surprises.