Heineken 0.0 was launched by the second largest brewer in the world, Heineken N.V., in March 2017, and was the second best selling alcohol free beer in the UK in 2018, with 2,184 litres (about 7,280 330ml bottles) sold to thirsty punters. This popularity can be down to their successful launch campaign (they apparently spent £2.5 million on marketing budgets), and Heineken’s already existing brand recognition and familiarity, but can it also be attributed to the quality of the beer?

‘Original’ Heineken lager is famous for it’s ‘refreshes the parts other beers cannot reach’ slogan, and a Heineken 0.0 straight from the fridge on a warm day is certainly refreshing. But then so are most beverages, even including a Beck’s Blue! Thankfully it seems that Mr Heineken and his offspring know a thing or two about producing a good beer.

Heineken 0.0 pours well with a golden colour and a good if short-lived head. Nicely hoppy on the nose, though alarmingly the smell reminds me of a certain leaf that seems to be popular with smokers here in South-East London. Well, it is Dutch after all…

The flavour mirrors it’s boozy big brother pretty faithfully. Some sweetness from the malt with fragrance and bitterness from Saaz hops, it’s a clean taste that remains pleasant to the end. Carbonation is fine.

I think it’s great that such a big brewer has obviously worked hard to produce a non-alcoholic beer whilst the market is still on the smaller side. Effort has certainly been made to produce a good flavour, and I can see this appealing to many ‘standard’ beer-drinkers. Don’t let terms such as ‘natural flavourings’ and ‘hop extract’ on the side of the bottle put you off.

Heineken 0.0 is widely available in most supermarkets and off-licenses, plus it’s also available to buy from the following online retailers:

The closest non-alcoholic beer to it’s alcoholic sibling, Heineken have done a good job of replicating their existing brew. Certainly refreshes some parts. 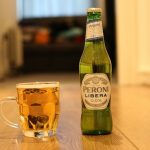