Bavaria 0.0 Original is probably the oldest alcohol-free beer of the modern age, certainly according to it’s producer, the Dutch company Swinkels Family Brewers. It entered the market in 1978, just as I also entered the world, and is stocked in supermarkets and pubs all over the world. Like Beck’s Blue and Kaliber, it’s also probably one of the beers that people of a certain age will associate with the phrase ‘non-alcoholic beer’.

The name ‘Bavaria’ gives connotations of a dark southern German beer, but as mentioned before the stuff is produced in Holland – though they have tried to emulate the style. The brewers claim that the beer undergoes a ‘unique brewing process’ which means that no alcohol is produced at all. The fact that yeast is not included in it’s list of ingredients can give us some clues as to what this process is.

Pouring a Bavaria 0.0 Original gives us a pale straw-coloured beer with a slight head, and lots of tiny bubbles visible. It’s gonna be a fizzy one! The smell of Pilsner malt is certainly strong, almost overpowering with it’s sweetness. But then again, if it hasn’t actually been fermented, the sugar content must be intact, and the 3.1g of sugars present per 100ml seems to verify this.

As the smell suggested, the actual taste of the beer is sweet and malty, and reminds me most of a malted-milk biscuit. It’s maybe a bit over-carbonated, although served chilled it does slip down quite well. But it’s not beer – to me it feels like someone has produced a beer-flavoured syrup for a Soda Stream and hasn’t got the syrup to water ratio quite right.

I’d call this one a soft drink rather than an alcohol-free beer. Sharing similarities to a shandy, it will quench your thirst on a warm afternoon. It’s not unpleasant, but it’s certainly not a beer!

You can find Bavaria 0.0 Original widely in most supermarkets. Just… don’t.

A soft drink version of beer. Will refresh when you want to be refreshed with a soft drink, but does not give the Pilsner lager experience it suggests. 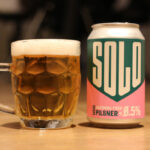