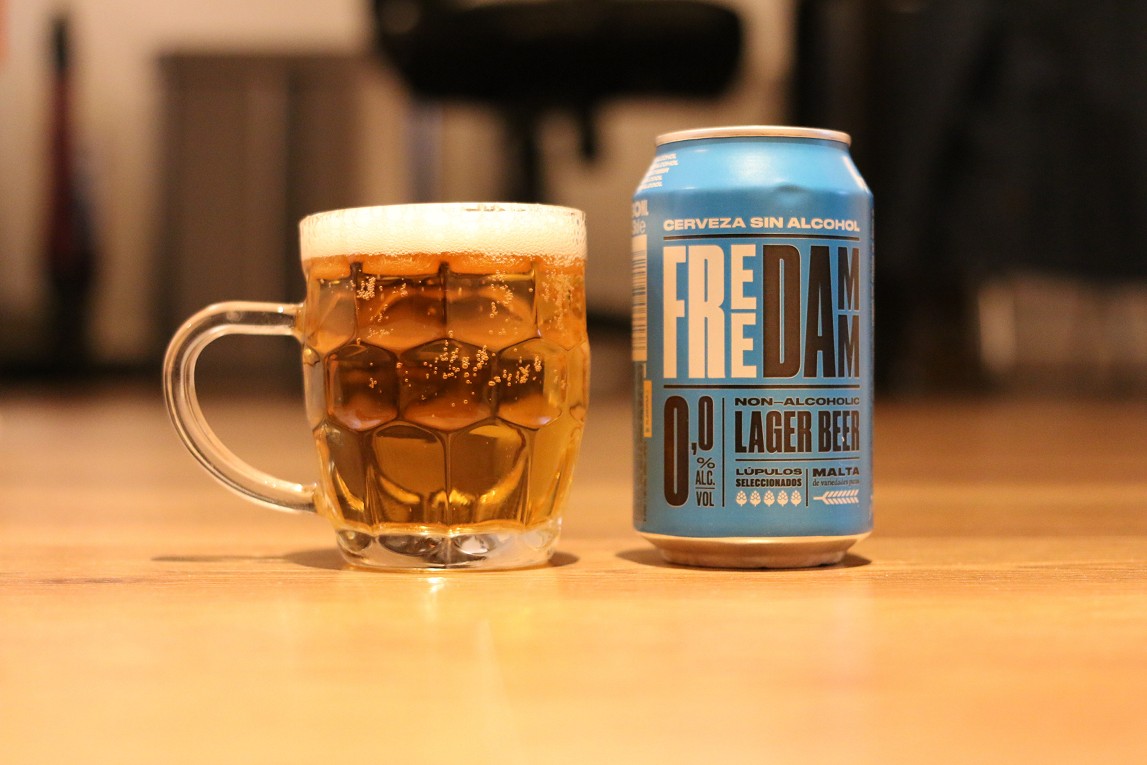 You’d be forgiven for thinking Free Damm’s producer, S.A. Damm, might hail from Holland or Germany, as technically that is the right area. The Spanish brewery was founded in Barcelona by the Damm brothers August and Joseph, natives of Alsace, back in 1876. They are the oldest brewing trademark in Spain, and are famous for their ‘Estrella Damm’ beer, a popular tipple in Barcelonian bars.

Despite it’s fame not being as prevalent in the UK, the brewery’s non-alcoholic offering ‘Free Damm’ is readily available in supermarkets throughout the country. It uses the same ingredients and fermentation process as their standard alcoholic beers, with the alcohol then being removed via vacuum distillation. They also claim to have developed a system to reintroduce some of the aromatic components which are usually lost in dealcoholising. Have they been successful in this endeavour?

Pouring from the can into my glass we get a pale amber liquid with a few bubbles. As usual with non-alcoholic lagers, we get a small foamy head, but then wave goodbye to it within a minute or so. So long friend!

Malt dominates on the nose, with a whisper of corn, apart from that pretty sterile. The malt and corn continue on in the taste of the beer, with some vague sweetness and bitterness, especially after swallowing. Carbonation is moderate though the beer is quite watery and lacking in body.

A generally inoffensive lager, it seems clear to me that Damm have produced this just to make sure there is a non-alcoholic product in their range. Many other alcohol free beers have made the effort to be flavoursome drinks in their own right, whilst this can only really be classed as middle of the road. Still better than a sugary coke at the pub though.

Refreshing and clean, but just not exciting.

Tonight's tipple is a St Peter's Without from @stp

Monday's AF beer is a Wheesht from @harviestounbre

Quenching my thirst this evening we have a Flat Ty

Tonight's tipple is a St Peter's Without from @stpetersbrewery, bought mainly for the bottle. If you're into malty… https://t.co/IuECPsYIUp

Monday's AF beer is a Wheesht from @HarviestounBrew. Lovely looking dark ale but surprisingly muted on the nose. Lo… https://t.co/u43UrorWuz

Another AF lager this evening, Belgian Jupiler 0.0 from @jupiler_belgium. The most popular beer in its native count… https://t.co/GmIwsjhNg8

Dry January means lots of offers and competitions for AF beer - and here's a fantastic one to start off with! https://t.co/wwVTLDbjRV

First AF beer of the new year and it's a Yardarm Lager from @jumpshipbeer. Lovely crisp lager with enough hops adde… https://t.co/mXCCeIFxtH

Another @coastbeerco beauty, their DDH IPA. Packed with juicy fruit again but with more of a subtle bitterness, it… https://t.co/gLoGx88duO