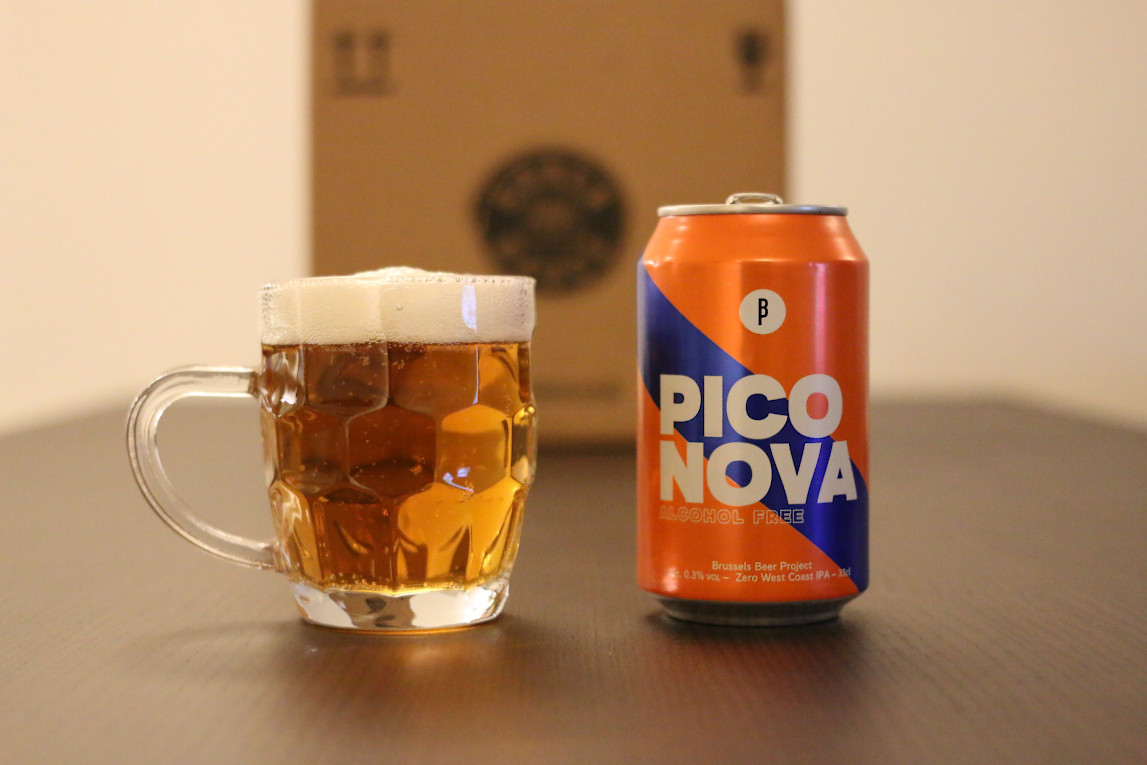 The Brussels Beer Project is a community of brewers that encourages experimentation and collaboration in the beer industry. Founded in 2013 by friends Olivier & Sébastien, the project seems to have grown out of a feeling that Belgian beer was becoming stale and relying on tradition more than innovation. BBP have attempted to tap into the creativity of younger brewers to challenge the ideas of flavour and taste. According to the company’s website they brew one new beer each week, usually collaborations between different brewers, sometimes from all over the world. Presumably some of these weekly beers make themselves part of the brewer’s core range if they are sufficiently successful.

Pico Nova is the project’s second non-alcoholic beer, it’s name translating to ‘new peak’ from Portuguese. What a Belgian beer has to do with Portugal is a mystery to me. It’s a West Coast IPA, which means we should be in for something hoppy and bitter. Looking at the hops used, Pahto, Sabro and Simcoe, we should be getting bitterness, citrus aromas and tropical fruit mixtures. But looking at the grains used in the brew we get some interesting additions, specifically toasted wheat and chocolate spelt grains. These are usually added to stouts for deep, dark, roasted flavours and adding body to a beer. I’ve certainly not seem them used often in an alcohol-free IPA, BBP’s experimentation at work it seems, so I think this will be an interesting brew to try.

Pouring the beer from the can we get an amber coloured liquid with great clarity. A decent white frothy head is produced, diminishes after a while, but provides some good lacing as we drink. From the design and colour scheme of the can and the shade of the beer, my brain is convinced that I’m about to drink a glass of Barr’s Irn Bru. Thankfully it only takes a quick sniff for my olfactories to dismiss this prospect. The nose gets juicy tropical mango, fragrant orange and grapefruit citrus and malty caramel. There may also be a slight roasted aroma in the background, intriguing!

On tasting we get fragrant dark orange citrus bitterness and resinous pine, with a background of mango, providing a little sweetness. Bitterness dominates but is pretty well balanced. There’s also a dark chocolate note in there, reminding me of a Terry’s dark chocolate orange, sans the sugary sweetness. This must be the spelt and toasted wheat at work, and certainly adds a point of interest to the drink. The body of the beer is great and the mouthfeel is almost creamy, thanks once again to the wheat I think. We get a bitter finish with a slight roasted note.

Pico Nova was a wonderful and completely unexpected drink, with great West Coast-style hoppy bitterness mixing with a touch of stout-like roasty chocolate darkness. Brussels Beer Project is showing it’s innovation and experimentation here, and I can only hope the success of this beer means there will be more nolo offerings coming from this brewery in the future.

Checking the beer’s can again I’ve just noticed that it’s brewed at De Proefbrouwerij, and have to say it’s the least ‘de proef’ beer I’ve had from them thus far!

You might be able to pick up a beer from Brussels Beer Project in an independent restaurant or bottle shop, but the easiest way to get your mitts on some Pico Nova is through the following shops:

Lovely bitter West Coast-style IPA with sneaky hints of roasted grains in there – and it works!

Who Let The Bees Stout?