Similar to many German breweries, Krombacher Brauerei has a brewing history dating back many years. They’ve been producing beer since the 1800s, and although much has changed in the  world around it during the 200 years since their inception, the brewery still sticks to it’s roots in a number of ways. They’re still located in almost exactly the same place where Johannes Haas first introduced yeast to wort and brewed his first Krombacher beer. They also still draw at least some of the water for their brews from the same spring that Herr Haas used, although it has since been christened the Krombacher Rock Spring.

Krombacher Brauerei are most famous for their traditional pilsner lager, a top seller in Germany for many years. Indeed it was not until 2007 that the brewery started producing it’s own wheat beer. Whereas many German weissbier brewers have a long tradition of producing such offerings, Krombacher’s reason for releasing their new beer was a modern one – market research. Never mind your romantic notions of ages-honed wheat beer recipes enabling you to enjoy what the German volk used to sup in centuries past, Krombacher Weizen Alkoholfrei was dreamed up by the geeks with clipboards and spreadsheets. Despite it’s less-than-exciting origins, does Krombacher’s entry into the weissbier world live up to their pedigree?

Pouring out from the bottle we get a cloudy amber/orange liquid with a fair amount of yeasty haze. A dense, fluffy white head is produced which is in danger of engulfing your chosen drinking vessel if poured too assertively. As well as being lovely and creamy, it sticks around for the whole drinking session. On the nose we get some sweetness from wheat malt, along with citrus peels, some spicy clove and a hint of yeasty banana. In the looks and smells departments it’s certainly a weissbier as we know it.

On tasting we get slightly sweet wheat malt with a slight spicy background of black pepper and clove. Fruity banana is also there, not too pronounced but making an appearance. Mouth feel is very rounded, well carbonated without being fizzy, light but not watery. We finish with a slight bitterness from the hops.

This certainly looks the business, and the typical wheat beer flavours are all there. It may be quite subtle but the end result is very satisfying. I’m glad that my initial trepidation was unfounded, and whilst it may not be as traditional and ancient as other wheat beers, Krombacher Weizen Alkoholfrei is a worthy addition to the stable.

The best place to buy Krombacher Weizen Alkoholfrei is online from one of the following drinks shops:

Whilst they might be milder than other wheat beers, the flavours are all there and make for a pleasing drink. Plus it produces the best head of any AF beers I’ve seen yet! 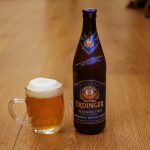