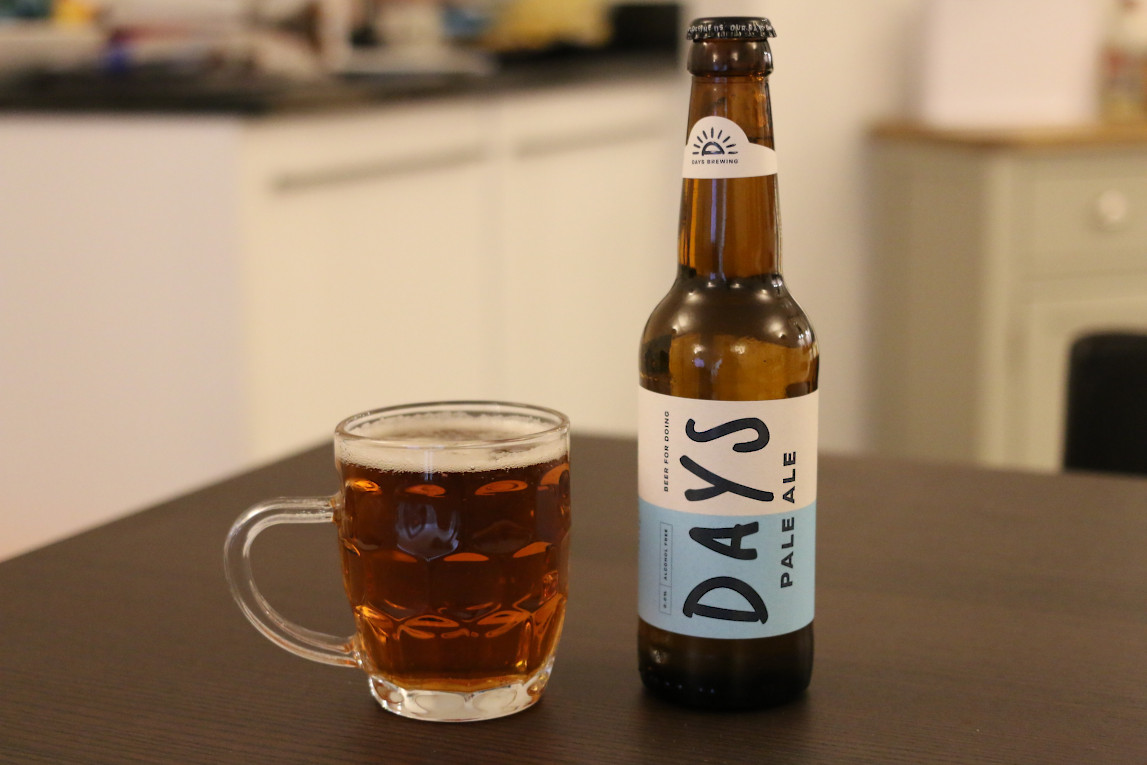 While reviewing over 120 alcohol free beers here at time of writing, I’ve noticed that the producers of such beverages take a number of approaches to marketing their wares. We have the macro breweries, who mainly market their AF beers as ‘just the same as their full ABV equivalents’. We have the brewers who market their non-alcoholic brews as being part of a cool alternative lifestyle, such as Rok Soba and Mash Gang. And we have breweries who market their bevs as things to enjoy as part of a healthy, active lifestyle. Days Brewing certainly feature in this section of my imaginary Venn diagram.

Days Brewing Co’s duo of alcohol-free beers have been around for over a year now, and from looking at the brewery’s social media accounts, it certainly looks like their brews are getting into the hands of their intended market. People are tagging themselves at the end of a run, on top of a mountain, or stretching in yoga poses, all with a bottle of Days either in their hand or somewhere close by. I’d say from a quick look at their Instagram feed, the majority of people seem to be going for their Lager, which I though was rather malty. The subject of this review, Days Pale Ale, uses a trio of CTZ, Hallertau Magnum and Herkules hops in it’s production. These are often used in American-style ales, and offer mainly bitter citrus flavours and aromas with a bit of spice. If we can get a full punch of these flavours we might be in for something tasty, so let’s crack open a bottle and get into it.

Pouring out the beer we get a dark amber coloured liquid with lots of visible carbonation. A small fluffy white head is produced which is neither here nor there, but does give us some lacing as we drink. On the nose we get malted grains, caramel sweetness, stone fruit aromas and slight citrus, orange marmalade and grapefruit rind. Smells like the CTZ at work here!

On tasting we get bready malt up front which develops into more fruity apricot and other stone fruit aromas. There’s a tinge of wortiness to the malt flavours. The orange marmalade also starts to come through, developing some bitterness, though remains in the background. There is some caramel sweetness to the drink but this is well tempered with bitterness, striking a decent enough balance. Carbonation is moderate and body is ok, giving a slick mouthfeel. We get a long bitter finish to the drink.

Days Pale Ale is a better beer than their lager, though moves away from traditional pale ale flavours and is approaching something more akin to a golden ale. The relatively low amounts of sugar and calories will probably appeal to the sporty/wellness section of the market and taste-wise it’s not bad at all. A good choice if you come across a bottle.

You can buy the whole range of Days Brewing Co’s beers including their lager from their online store, or from the following supplier:

A decent enough pale ale with enough hop flavour to hide the slight wortiness of the beer.