Days Brewing Co are an arm of the Better Beverage Company Ltd, founded at the end of 2019 by friends Michael Gammell and Duncan Keith. According to their website, their aim with Days Brewing is to brew proper beer with proper ingredients, but with zero alcohol. 2019 seems to have been the year of choice for setting up non-alcoholic brewers, I wonder what happened back then to produce the NA beer explosion? Which dusty bottle of Beck’s Blue sold to a distraught designated driver in a pub was the straw that broke the camel’s back? Whatever happened, Days Brewing emerged with their first couple of alcohol-free beers in September 2020, and with their own take on the brewing process.

Days’ beers are brewed similar to other beers, but whilst other AF beers may be brewed to full strength and then have their alcohol content removed by industrial processes, Days’ method ensures no alcohol is produced at all, thus genuinely offering a beer with 0% ABV. Their website talks about a unique process invented in partnership with a master brewer, which they call ‘double fermentation’, but do not go into any further detail. Whilst I’ve not heard of this method before, it does give me hope that we’re getting a beer with flavour and not another worty malty beverage. Is Days Lager truly a ‘better beverage’?

Pouring out from the bottle we get a bright clear golden liquid which forms some nice froth as the glass fills, though this recedes quickly to a slight foamy ring. The carbonation looks quite lively, with lots of visible bubbles. On the nose we get bready malt, grains and a touch of hoppy floral aroma, which all seems in line with your standard Hallertau-hopped lager.

The malt remains forward as we taste, still quite bready, with some slight sweetness to it. We get some stone fruit drifting into the flavour profile in the form of apricot, as well as some slight floral and citrus notes. The carbonation is quite tight and the mouthfeel is pretty good, though on the verge of wateriness. We get a sweet malty finish to the drink.

Days Brewing’s ‘double fermentation’ technique does produce the taste of beer but we still get the flavours and aromas of unfermented wort in the drink, though not on the same level as other malty AF beers such as St Peter’s Without. Certainly not as much character as other hoppier lagers, if you like your beers malty but otherwise light then this should keep you happy.

You can buy the whole range of Days Brewing Co’s beers including their lager from their online store:

An AF lager on the malty side of the spectrum, not quite as thirst-quenching as other beers out there. 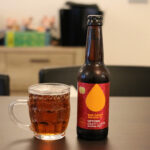