There’s a lot of non-alcoholic beer coming out of Suffolk these days. Adnams, St Peter’s, and Greene King’s Morland are all producing their own alcohol-free ales, but it’s Big Drop Brewing that, along with focusing solely on 0.5% ABV beer, have the most extensive range of products. In this review we’ll be looking at their newly rebranded ‘Off Piste’ Hazelnut Porter.

Porter is a dark beer named after the river and market porters in London who took a shine to the drink, and was the first mass produced type of beer. It’s very similar to stout, but usually has a lower ABV and tends to be drier. The craft brewing scene have been cranking out porters for the last decade, and often these include different flavour combinations, such as chocolate, vanilla, plum and other deep aromas. Big Drop have already seen success with an AF stout, indeed it was their first ever offering. Have they also worked their magic on this porter, and is the hazelnut a good addition?

Pouring out the beer we get a deep dark liquid, with actually a reddish colour if you look closely in the light. A head does attempt to make an appearance, but the effort is lacking, and it’s soon looking like a glass of Pepsi Max. Thankfully it doesn’t smell like a cola, and has a lovely sweet roasted malt aroma, with chocolate and coffee making an appearance. Despite the name of the brew, I could only discern the slightest whiff of hazelnut, and this whiff had an artificial note.

The taste starts off with malty sweetness, moving on to some dark chocolate bitterness, similar to a bourbon biscuit. Big Drop describe the taste as ‘almost a chocolate bar in a glass’. If this is the case I can only think they are referring to one of those awful diabetic chocolate bars. There is flavour there, but it feels very watered down, with the promoted hazelnut barely existing as an aftertaste.

Big Drop definitely have form when it comes to producing a flavoursome dark beer. Their Chocolate Stout was their first released tipple, and so they should know what they’re doing in this respect, right? I’m not sure where they’ve gone wrong in the production of Off Piste Hazelnut Porter but they’ve certainly gone down the wrong road somewhere. If you’re after a NA porter, go for their Galactic Milk Stout or Thornbridge’s Little By Little instead, you’ll be far more satisfied.

You might spy some Big Drop Off Piste Hazelnut Porter at a Sainsbury’s if you’re lucky, but it’s easily available to buy from the following online retailers:

Promises so much, but fails to deliver. If you want flavour and richness in a dark beer, try Big Drop’s Galactic Milk Stout instead. 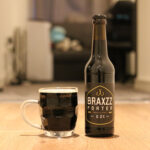