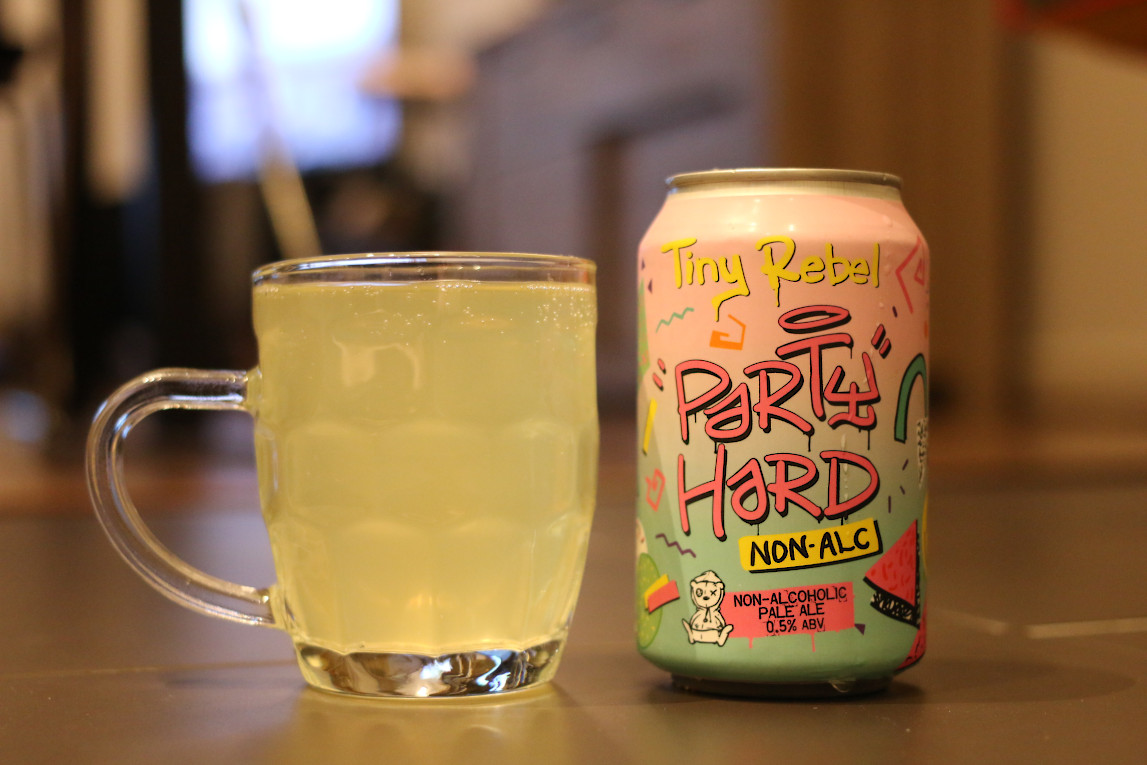 Tiny Rebel have come a long way from the days when they were avidly homebrewing in their dad’s garage. The duo of Brad Cummings and Gazz Williams quickly outgrew their vehicular coop, and their business began picking up awards left, right, and centre for their innovative and sometimes controversial beers. Now one of the most successful craft brewers in Wales, they’ve stayed true to their roots and remain brewing in their hometown of Newport, albeit in slightly larger premises nowadays.

Tiny Rebel Party Hard was launched as part of their non-alcoholic  beer 4 pack that came out in time for Dry January 2021. The collection was quite eclectic, including an oat milk mocha stout, an alcohol-free version of Tiny Rebel’s flagship IPA Clwb Tropica, and even a sour based on the old rhubarb and custard boiled sweets. Like most of Tiny Rebel’s output, the can artwork was on the gaudy side of eye-catching, and Party Hard’s packaging design is certainly no exception. Bright pinks, greens and yellows abound, with a design that probably adorned a jacket I happily wore in the 1980s. Whilst I may have been a bit young to ‘party hard’ back in that neon decade, I’m a big boy now and can easily handle any nolo drink you throw at me. Will Party Hard live up to it’s name and be a hoppy party in my mouth, or something light and easy and more tounge-in-cheek?

Pouring from the can we get a cloudy pale yellow liquid, looking pretty much like lemon barley water. There is little to no visible carbonation, and likewise no head to speak of, maybe a bubble or two trying to make itself known but failing. On the nose we get some tropical fruit aromas, lychee up front with mango also making an appearance, and a touch of lemon citrus. There is some sweetness there but it’s quite muted.

The lychee continues into the taste, with a subtle fruitiness that also grows to incorporate other tropical flavours, mainly mango. It’s all rather light, nothing ‘hard’ about these flavours. There’s also a touch of citrus bitterness there too but the drink remains mild. Despite the lack of visible bubbles the carbonation level is pretty good, saving the beer from becoming too watery. We get a short slightly bitter finish to the drink.

The lack of any malt flavour and the mild fruitiness of Party Hard makes it more like a soft drink to me, though thankfully not a sickly sweet one. It’s easy enough to drink, but probably won’t hit the spot for you if you’re after the taste of a pale ale. My wife enjoyed it, but that’s probably not a ringing endorsement for a beer!

Tiny Rebel’s beers are often in pubs in the south of Wales, though your best bet for finding Party Hard is online from one of the following drinks shops:

Party Hard is great if your idea of a party is a quiet night in with a mildly fruity beverage.