Rok Soba are a lifestyle brand that advocates for mindfulness, wellness, and creating an improved life for former drinkers. Offering cool merchandise such as men’s apparel and accessories, links with professional help and mentorship for those wishing to change their relationship with alcohol, and of course their range of non-alcoholic beers. I suspect they could also give you some decent tips on where to pick up some bangin’ ink, judging by the amount of tattoos adorning the flesh of their models. The brand also run the ‘first and largest alcohol-free festival of its kind in the UK’ – the Rise Up Festival. Held in the Kent countryside, the festival offers a number of different music genres in their line-up, with no alcohol being served at the event, making it family friendly. It looks like Rok Soba may also be launching another alcohol-free drink in conjunction with the festival, so keep your eyes peeled.

Rok Soba’s first foray into the non-alcoholic beverage marketplace was in 2020 with a limited edition stout brewed in partnership with Nirvana Brewery. In May 2021 they launched their own range of two beers, their Tripel, and the subject of this review, their Voyager IPA. Both beers are brewed in Belgium, though whether or not they are the product of the De Proefbrouwerij brewery I am still unsure, and as far as I can see the other AF beer commentators are similarly at a loss. Apart from lager, IPA is the most common alcohol-free beer style on the market, and as the scene matures the quality has also improved. It’s harder for a brewer to hide behind a barrage of hops now, with we non-alcoholic IPA fans wanting flavour, aroma, balance, mouthfeel and more to be on point. Will Rok Soba’s Voyager IPA rock my world?

Pouring out the beer from the can we get a dark amber coloured liquid with some slight haze to it. A medium-sized fluffy head is produced, though I reckon this could have been encouraged more by a harder pour. It sticks around giving some good lacing we drink. On the nose we get sweet malt and grassy hops, along with some citrus notes of orange and grapefruit, and a slight whiff of ‘dankness’. Pleasant, but not quite as full on as other similar IPAs.

On tasting we get tropical mango up front, which didn’t seem to be present in the aroma, but offers some sweetness. The citrus then makes itself known with some grapefruit/lemon bitterness, along with a dank, grassy aroma. The hoppy fruit is balanced well by sweet barley malt, and is quite reminiscent of the flavours of 2 Roots IPA and Vandestreek’s Playground. The beer is medium bodied with the mouthfeel being good and smooth. We get a bitter fruity finish to the drink.

Rok Soba Voyager IPA is another quality beer from the lifestyle brand, offering authentic flavours without the alcohol to complement their ethos. One for the fans of West Coast IPAs, or anything hoppy, this sits comfortably alongside the top tier of the style in my opinion.

I had my first Voyager IPA at a sushi bar in Brighton, but they are also available further afield. I bought my cans direct from Rok Soba, though at time of writing they seem to be out of stock, so try one of the following online retailers:

Semi-sweet with great tropical and citrus flavours, this should sort out your IPA craving, leaving you refreshed and ready for another! 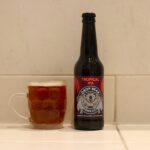