London-based Infinite Session have been busy at work churning out the AF beers for nearly 3 years now. Along with committing to a maximum of 0.5% ABV for their beers, they’re also attempting to cut the calories in their offerings, going against the usual ‘beer = hundreds of empty calories’ norm. Lower calories isn’t really a new thing in the non-alcoholic beer market, as most such beers will be less carby by default. However Infinite Session’s brews are definitely on the lower end of the spectrum when it comes to the beer-belly builder. Their ‘Pale’ comes in at 36 calories per can, their ‘Pils’ has 39 calories per can, and the subject of this review, their ‘IPA’ also clocks in at 39 calories per can.

Infinite Session IPA is what is known as a ‘dry-hopped’ IPA. Whereas hops are usually added to the wort near the end of the boiling process to impart aroma and flavour into the beer, ‘dry-hopping’ involves adding the hops after the wort has cooled and is beginning it’s fermentation stage. This lessens the amount of essential oils that are lost in the brewing process, hopefully resulting in a more flavourful beer. ‘Dry-hopping’ is becoming the hopping method of choice amongst many brewers, with Infinite Session seemingly one of the converts. Has this method of flavouring produced a tangy and appealing AF IPA?

Pouring from the can we get a deep golden amber liquid with slight cloudiness, and a decent sized head froths up before us. And for once, it stays around for much of the imbibing – hooray! On the nose the aromas of malt and citrus combine in a delectable way, appetising us for what is to come. The Citra hops are certainly making their presence known nasally, do they also do a similar job on our taste buds?

Indeed, the citrus bitterness packs a punch in our initial mouthful, with a toffee malt backbone. Great stuff, although midway through the session the tastes get somewhat lost, with a thin mouthfeel becoming more apparent. A crisp lemon zest finish rounds things off nicely though.

Another great sessionable alcohol-free beer from Infinite Session. As with the others, there is certainly room for improvement, mainly in the body of the beer, but as a good refreshing IPA it does the job well. It has me hoping that Infinite Session will now branch out more into other styles, as they assuredly have the knowledge. Maybe a stout or wheat beer in the future? I’ll be sure to keep you informed with whatever comes.

Packs of Infinite Session IPA are available at many Sainsbury’s stores, and also from the following online retailers:

Great hoppy citrus aromas and a good bitter taste make this a well-rounded IPA which of course has room for improvement but goes down the hatch with ease. 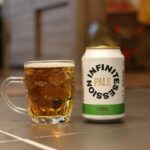