Sharp’s Brewery’s Doom Bar is the best selling bottled and cask ale in the UK. First brewed in 1996, you’ll see it in pubs, off-licenses and supermarkets almost everywhere. It’s even shipped worldwide to the states and the far east. In the early noughties it seemed that everyone in the south of England was drinking it, and even fictional detectives have a fondness of the amber ale. I have to say it never really tickled my fancy, but I have friends who swore by it. At least they did until around 2012. Sharp’s Brewery were bought out by beer overlords Molson Coors in the first quarter of 2011, and by many accounts the quality of their beer has gone downhill since. It’s still selling well though, accounting for about 90% of the brewery’s sales figures.

Doom Bar Zero is the company’s obvious attempt to cash in on the burgeoning nolo movement. Launched in the autumn of 2020, it boasts of being a ‘perfectly balanced beer’ on the side of the bottle. I’ve reviewed one other alcohol-free beer from the Molson Coors Brewing Company before, their Peroni Libera. It came out pretty well, but Doom Bar Zero is a completely different style of beer to the Libera. Have Sharp’s Brewery successfully navigated the seas of non-alcoholic success or will they run aground upon the sand bar of worty failures?

Pouring the beer from the bottle we get a dark amber liquid with good clarity and lively looking carbonation. A decent beige head can be encouraged to fluff up, but it quickly fades away. It certainly looks like it’s big brother. On the nose we get bready malt which offers a hint of sweetness, but nothing else of note.

The malt continues into the taste of the beer, and unfortunately it’s very much like unfermented wort. It’s quite sweet, and we get some caramel flavours in there with some date too. But there’s also a vegetable-like flavour in there, in my opinion closest to cabbage. It’s quite thin, but the carbonation is rather high and aggressive.

Not a good effort from Sharp’s / Molson Coors, which is surprising considering how popular it’s alcoholic big brother is. This may be one of the AF beers that gets a new recipe within six months, if not then it’ll be fuel for the nay-sayers who are adamant that it’s not possible to create a decent non-alcoholic beer.

Poor showing for such a popular beer producer, close to carbonated wort in a bottle. Pass. 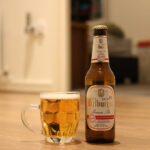