Clausthaler can surely be seen as one of the OG non-alcoholic beer brewers. They’ve been brewing alcohol-free lagers using their controlled fermentation method since the 1970s, which in the modern AF world could be considered ancient relics. But they’re still brewing away, with their Clausthaler Original still having what it takes to be a decent, though middle-of-the-road lager, and are coming out with new brews to suit the changing market, of which Clausthaler Unfiltered is their latest addition. Alternatively known as Naturtrüb or Zwickl, it’s a lager, but as you may have already worked out, is unfiltered.

Until a hundred or so years ago, most beers were unfiltered, with the yeasts, proteins and other particulates floating freely in your pint. Whilst this wasn’t necessarily a bad thing, filtering beer helps to stabilise it so that it doesn’t continue fermenting, and also gives it arguably a better appearance. As the saying goes, the first bite (or sip in this case) is taken with the eyes. There are however styles of beer that are defined by their cloudy appearance, such as weissbiers, and many brewers believe that filtering the sediment from their brews alters the taste negatively.

Unfiltered beer is certainly more popular in craft brewing, with drinkers regularly sharing pictures of their lovely juicy hazy IPAs on social media. Does Clausthaler Unfiltered have what it takes to join these Instagram darlings? And more importantly how does it taste?

The beer pours a cloudy amber colour, but clarity-wise it’s certainly not as murky as other unfiltered beers. A nice white head is produced and sticks around, giving some lacing as the drink progresses. On the nose we get some malt sweetness and a slight citrus aroma, with a note of vanilla in the background.

The drink starts with a caramel malt sweetness, and then in comes a hit of grapefruit citrus from the Cascade hops, along with some tropical pineapple. The drink is well balanced with neither the sweetness or bitterness swamping your palate, and the beer remains light with a good mouthfeel. We get a smooth slightly sweet, slightly bitter finish to the drink.

The addition of dry-hopping with Cascade certainly adds more interest to Clausthaler Unfiltered, taking it above and beyond it’s big brother’s standard lager flavours and aromas. The hops add to every part of the drinking experience without making the beer heavier, and I really enjoyed downing my pair of bottles. Granddad Clausthaler can still brew a decent alcohol-free beer.

You might find some bottles of Clausthaler Unfiltered in your local off-license if you’re lucky, but it’s best to get some from one of the following drinks shops:

Improves on Clausthaler Original in every respect. Choose Unfiltered if you have the option. 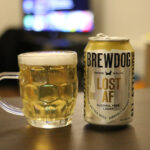