The always innovative and prolific BrewDog launched their Lost Lager back in September 2018. Their stated aim for their beer was to go back to the earlier days of lager production where flavour instead of volume mattered and in true BrewDog style promotional events were aplenty. Throughout their own bars the brewer offered a ‘beer amnesty’ where people could swap their cans and bottles of mainstream lager for a pint of their Lost Lager at no cost. This collection of unwanted beer was then donated to the University of Bristol where it was put to use in the production of biofuels, biogas and biofertilisers.

BrewDog launched the non-alcoholic version of this lager in June 2020, naming it Lost AF. It uses a pilsner malt and Saphir hops to try and recreate the taste of the lagers of old. The alcoholic version utilised a lager yeast from Munich’s Weihenstephan Brewery, but depending on how BrewDog have removed the alcohol from the AF version, a different yeast strain may have been used here. By all accounts Lost Lager is a good seller for the brewer, does the nolo version also look to be another success for them?

Pouring from the can the beer appears to be a pale straw coloured liquid, with maybe a very slight haze. Head-wise we get a bit of white froth but nothing to speak about, but it does lead to some nice lacing later on. On the nose we get floral notes and citrus, mainly lemon zest, and a touch of pale malt sweetness.

The citrus continues on into the taste, though more tangerine than lemon this time. A good light malt base keeps it together, balancing bitterness with floral notes and some spice. The body is light and the mouthfeel is fine, and a long bitter finish rounds the beer off nicely.

Quite a crisp and refreshing beer, Lost AF is a good addition to the BrewDog alcohol-free lineup mainly because their other offerings have been hoppy flavour bombs, and this gives an option for those who want something a bit lighter. That being said, there is still room for a bit more flavour in there, but I’m happy to drink this again.

You can get BrewDog Lost AF at most supermarkets and off-licenses in the UK, and it’s also available from one of the following online retailers:

A decent pilsner style lager with a bit more taste and character to it than other mass produced AF lagers. 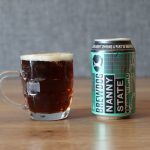